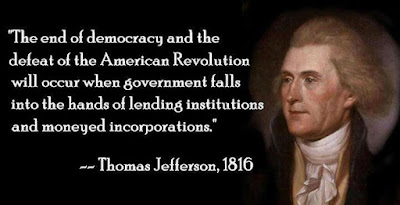 Thomas Jefferson, Founding Father and third president of the United States, warned about the threat big banks posed to our liberty and financial security. He wrote back in 1802 that
"I believe that Banking institutions are more dangerous to Our liberties than standing armies. If the American people ever allow Private banks to control the issue of their  Currency, first by inflation, then by Deflation, the banks and corporations that will Grow up around the banks will deprive the people Of all property - until their children Wake-up homeless on the continent their fathers Conquered."

"[A] secretive group deploying billions of dollars to favored banks, operating with little oversight by the public or elected officials...

The New York Fed is in the hot seat for its decision in November 2008 to buy out, for about $30 billion, insurance contracts AIG sold on toxic debt securities to banks, including Goldman Sachs Group Inc., Merrill Lynch & Co., Societe Generale and Deutsche Bank AG, among others. That decision, critics say, amounted to a back-door bailout for the banks..."
(David Reilly, Secret Banking Cabal Emerges From AIG Shadows: David Reilly Bloombert,  Jan 28, 2010)
Thomas Jefferson felt that "To compel a man to subsidize with His taxes the propagation of ideas which he Disbelieves and abhors is sinful and tyrannical." Taxpayers have been forced to bail out the "too big to fail" banks to the tune of billions, if not trillions of dollars. "[S]ome experts warn that government spending on support for struggling financial services companies will ultimately reach into the trillions of dollars." (Colin Barr, Bank bailout could cost $4 trillion, FORTUNE, January 27, 2009) However, the Congressional Budget Office says the 2008 bank bailout "only" cost taxpayers $25 billion to help rescue struggling banks (as of November 30, 2010). (CBO: Bank Bailout Cost Taxpayers $25 Billion)
"[W]hen unelected and unaccountable agencies pick banking winners while trying to end-run Congress, even as taxpayers are forced to lend, spend and guarantee about $8 trillion to prop up the financial system, our collective blood should boil." (David Reilly, Secret Banking Cabal Emerges From AIG Shadows: David Reilly Bloombert,  Jan 28, 2010). Thomas Jefferson believed "The strongest reason for the People to retain the right to keep and bear arms Is, as a last resort, to protect themselves Against tyranny in government" and that "The tree of liberty must be Refreshed from time to time with the blood of Patriots and tyrants."

The time is upon us when we must again free ourselves from the yoke of tyranny. A few unelected Elite are now able to dictate how taxpayer money is spent. They demand welfare for their Wall Street buddies. They force taxpayers to prop up failed institutions. These financial institutions made bad investment decisions. Giving them money simply rewards bad behavior. If the free market were allowed to function, the poorly-run financial institutions would collapse, as they should. Unfortunately, in a command economy run by private bankers, taxpayers are forced to prop them up. If Americans do not stand up to this tyranny now, they will "Wake-up homeless on the continent their fathers Conquered" in the very near future.

FED Up: Founding Fathers, the Banking System, and the Federal Reserve 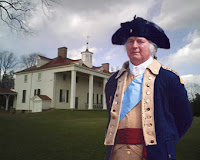