Rally Around the Flag - Flag Day


On Flag Day, June 14, 2008, Dr. James P. Hodges presented a speech entitled "Rally Around the Flag" to Fort Vancouver, Washington Historic Reserve Trust. Here is the text of the speech, which has been edited and modified for print.

It is altogether fitting that we honor our flag as we celebrate Flag Day each June 14. Our flag is much more than a piece of cloth flapping in the wind. It is the symbol of our nation. It represents who we are,  our shared history, our culture, our patriotism, and our love for our country.

The American flag:
symbol of valor, purity of morals, liberty and justice for all.
The American Revolution was a remarkable victory for liberty. Against all odds, 13 separate colonies on the farthest edge of civilization transformed themselves into a new nation-state: the United States of America. Making this change from British tyranny to self-government was due to the collective leadership wisdom of our Founding Fathers. Let us honor the flag's important role in our nation's history.
When George Washington arrived in Boston in July 1775 to take command of the newly created Continental Army from the militia of the four New England colonies, the flag then flying was bright yellow. It had a picture of a rattlesnake in the middle that was coiled and ready to strike. At the bottom, the flag had the inscription, “Don’t tread on me.” This flag symbolized Americans' defiance of Britain trampling upon their rights. The rattlesnake was chosen for a couple of reasons. For one, it is a symbol of Americans because it is native to America. In addition, one rattle alone does not make much noise, but all rattling together in unison can make quite a racket. Finally, the rattlesnake does not attack unless provoked, but if it is trodden upon, it will deliver a deadly strike - just like the Americans.


After the French and Indian War ended in 1763, the British started to trample upon the rights Americans felt entitled to as English subjects. Since the first period of colonization, each colony had more affinity with the Mother country (England) than with each other, but the colonies began to draw together. By 1775, there was a significant change in attitude, but the transformation was not yet complete. When Washington visited the men in July 1775, he was appalled by the animosity often shown toward men from a different colony. For example, troops of one colony would often refuse to serve under the officers of another. There was once a terrible melee in which troops from the maritime part of Massachusetts had a “free for all” with the backwoodsmen. It was so bad that they actually gouged each others' eyes out. Washington put an end to the brawl immediately, shouting that they were not to fight each other but to reserve themselves to better fight the British. Washington admonished his troops, saying that they must be united in both thought and deed. Washington told them that they were now the troops of the United Colonies of North America, so they must  start considering themselves to be Americans. 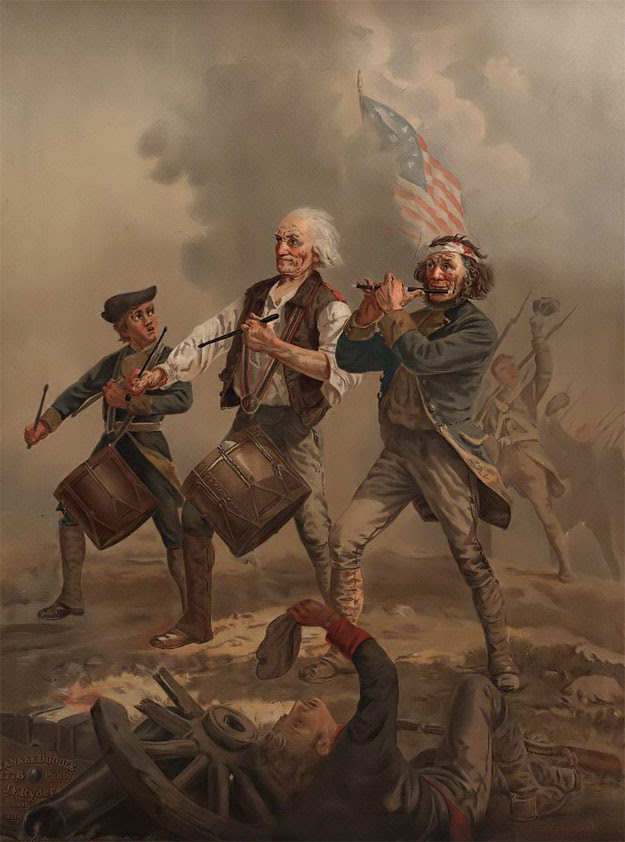 Unfortunately, the attitude of being loyal first to one's state lingered for a long time despite all of Washington's efforts. His step-grandson in law, General Robert E. Lee, was an example. After 30 years of devoted service to his country, Lee put loyalty to his state, Virginia, over that of his country. When Virginia left the Union, he went with it and fought for the Confederacy against the Union.

The Americans wanted a flag to symbolize cohesion, cooperation, and unity of vision for all Americans. To that end, a flag with 13 alternating red and white stripes next to each other was designed. The 13 stripes symbolized the inter-connected 13 colonies. At the time, the colonies were still British, so the British Union Jack was placed in the upper right-hand corner. This flag was called the "Grand Union" and flew from January 1, 1776 to June 14, 1777.

In November 1776, four months after America declared its independence from Great Britain, the American warship, Andrew Doria, entered St. Eustatis, a Dutch island in the West Indies. Andrew Doria was there to procure gun powder and other supplies for the war effort. Andrew Doria fired a salute to the Dutch flag, as was customary. To the Americans' joy and relief, the Dutch returned the salute with booming cannons. This  was the first time a foreign government recognized America as an independent nation.

Andrew Doria: The First Salute
On June 14, 1777, the legendary Betsy Ross sewed the "Stars and Stripes," which became the national flag. The new flag was highly symbolic, and Washington consulted with Ross on the design. The British Union Jack was replaced with 13 stars in a circle, which represented the 13 colonies. The 13 red and white stripes that also symbolized the colonies were retained. The red stood for the valor of American arms; the white stood for the purity of their morals; and the blue stood for liberty and justice for all. Washington said at the time that they had plucked the stars from heaven. The first time the "Stars and Stripes" flew in battle, the Americans were victorious. At Fort Stanwix in upstate New York, the Americans defeated the British  and their Indian allies, who were invading America from Canada.
The flag played a key role in the writing of the national anthem. In September 1814, toward the end of the War of 1812, Francis Scott Key, a lawyer from D.C., was a prisoner aboard a British warship. A strong British  fleet was attacking Fort McHenry (named after James Mc Henry, Washington's Secretary of War), which protected Baltimore and the middle states. Key was allowed to watch the battle. He saw the American flag proudly flying at "twilight’s last gleaming." All through the night, the flag was illuminated by the light of cannon fire all around. At dawn’s early light, the flag was still waving, which meant the British had been defeated. Deeply touched, Key wrote his famous poem to commemorate the victory, which became the national anthem. 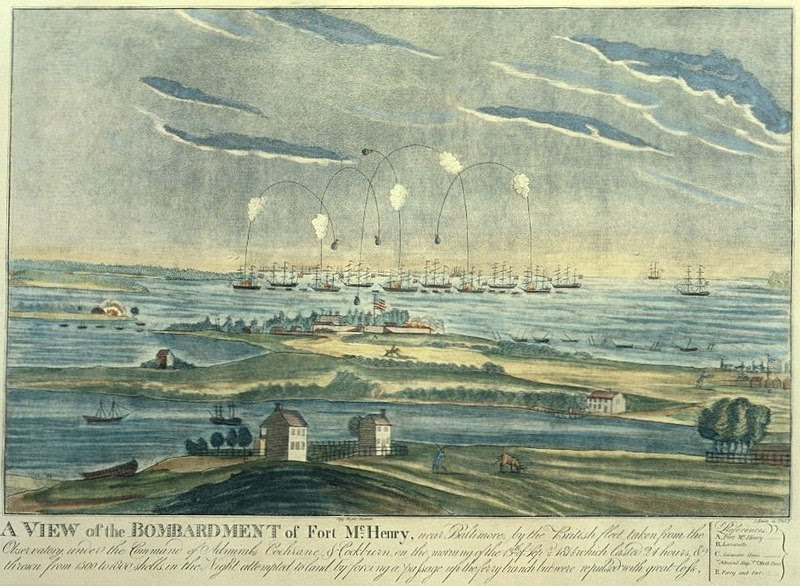 The Battle of Fort McHenry

O! say can you see by the dawn's early light,
What so proudly we hailed at the twilight's last gleaming,
Whose broad stripes and bright stars through the perilous fight,
O'er the ramparts we watched, were so gallantly streaming?
And the rockets' red glare, the bombs bursting in air,
Gave proof through the night that our flag was still there;
O! say does that star-spangled banner yet wave
O'er the land of the free and the home of the brave?

On the shore, dimly seen through the mists of the deep,
Where the foe's haughty host in dread silence reposes,
What is that which the breeze, o'er the towering steep,
As it fitfully blows, half conceals, half discloses?
Now it catches the gleam of the morning's first beam,
In full glory reflected now shines in the stream:
'Tis the star-spangled banner, O! long may it wave
O'er the land of the free and the home of the brave.

And where is that band who so vauntingly swore
That the havoc of war and the battle's confusion,
A home and a country should leave us no more!
Their blood has washed out their foul footsteps' pollution.
No refuge could save the hireling and slave
From the terror of flight, or the gloom of the grave:
And the star-spangled banner in triumph doth wave
O'er the land of the free and the home of the brave.

O! thus be it ever, when freemen shall stand
Between their loved home and the war's desolation!
Blest with victory and peace, may the heav'n rescued land
Praise the Power that hath made and preserved us a nation.
Then conquer we must, when our cause it is just,
And this be our motto: "In God is our trust."
And the star-spangled banner in triumph shall wave
O'er the land of the free and the home of the brave!


The American flag at Fort McHenry was hard to miss. The fort commander wanted everyone to see it, so he flew a huge flag. A garrison flag was normally 20 by 30 feet, but this flag was 30 by 42 feet. It was flown from a 90 foot pole. This flag had 15 stars and 15 stripes, because for a short period of time, flag designers added a new star and a new stripe for every new state that joined the Union. They soon realized, however, how cumbersome that design could become, so they reverted back to the original 13 stripes. They continued to add a new star to symbolize each new state that joined the Union. For example, Washington was the 42nd star to be added to the flag when it joined on November 11, 1889.
When you look upon the Stars and Stripes, remember what it stands for: valor, purity of morals, liberty and justice for all. America does not exist separate from its citizens. We are America. We must be the living embodiment of those ideals for which it stands. Let us aspire to be the values the American flag symbolizes. Let us be the shining examples of ethical and moral conduct that Washington and the other Founding Fathers envisioned for our nation.

God Bless our flag! Long may it wave over the land of the free and home of the brave!