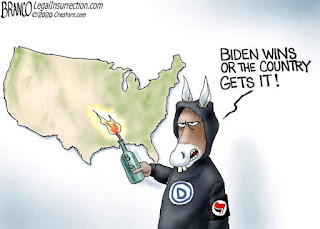 On election night, November 3, 2020, a color revolution was set into motion. A color revolution is a type of coup that combines election fraud with civil unrest. The Deep State/Democrats engaged in massive election fraud that involved Dominion voting machines, sketchy midnight ballot dumps, and various other frauds that are too numerous to list. Evidence can be found at https://hereistheevidence.com, but more will no doubt be revealed in court proceedings. Antifa and BLM agents provocateur were standing by, should the election not go their way. Many businesses in blue cities boarded up their shops in anticipation of riots. The next morning, Biden was in the lead, miraculously surpassing Trump's lead in key swing states the night before. 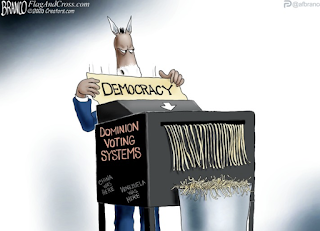 By subverting the election, the perpetrators are depriving the states (and citizens) of a republican form of government.  Article IV, Section 4 of the US Constitution states: "The United States shall guarantee to every State in this Union a Republican Form of Government…" A republic is a form of government in which a state is ruled by representatives of the citizen body, i.e. we vote to elect government officials. The Deep State is attempting to install Joe Biden as president in opposition to the will of the people.

The federal government has the duty to restore the republican form of government per the Constitution. President Trump must act. 10 U.S. Code § 253 states:

"The President, by using the militia or the armed forces, or both, or by any other means, shall take such measures as he considers necessary to suppress, in a State, any insurrection, domestic violence, unlawful combination, or conspiracy, if it—

(1) so hinders the execution of the laws of that State, and of the United States within the State, that any part or class of its people is deprived of a right, privilege, immunity, or protection named in the Constitution and secured by law, and the constituted authorities of that State are unable, fail, or refuse to protect that right, privilege, or immunity, or to give that protection; or

(2) opposes or obstructs the execution of the laws of the United States or impedes the course of justice under those laws. 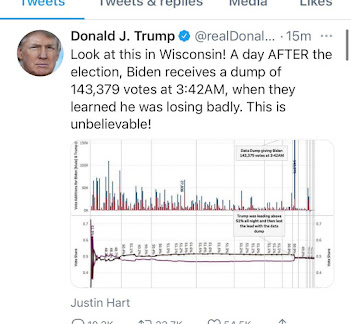 In any situation covered by clause (1), the State shall be considered to have denied the equal protection of the laws secured by the Constitution."

After the Civil War ended in 1865, the US President was authorized to occupy the former Confederate states with the military in order to restore a republican form of government (TEXAS v. WHITE, 74 U.S. 700 (1868)):

"Congress passed, in March 1867, three certain acts, known as the Reconstruction Acts. By the first of these, reciting that no legal State governments or adequate protection for life or property then existed in the rebel States of Texas, and nine other States named, and that it was necessary that peace and good order should be enforced in them until loyal and republican State governments could be legally established, Congress divided the States named into five military districts (Texas with Louisiana being the fifth), and made it the duty of the President to assign to each an officer of the army, and to detail a sufficient military force to enable him to perform his duties and enforce authority within his district. The act made it the duty of this officer to protect all persons in their rights, to suppress insurrection, disorder, violence, and to punish, or cause to be punished, all disturbers of the public peace and criminals, either through the local civil tribunals or through military commissions, which the act authorized...

These new relations imposed new duties upon the United States. The first was that of suppressing the rebellion...

The authority for the performance of the first had been found in the power to suppress insurrection and carry on war...

In the exercise of the power conferred by the guaranty clause, as in the exercise of every other constitutional power, a discretion in the choice of means is necessarily allowed. It is essential only that the means must be necessary and proper for carrying into execution the power conferred, through the restoration of the State to its constitutional relations, under a republican form of government, and that no acts be done, and no authority exerted, which is either prohibited or unsanctioned by the Constitution.

It is not important to review, at length, the measures which have been taken, under this power, by the executive and legislative departments of the National government. It is proper, however, to observe that almost immediately after the cessation of organized hostilities, and while the war yet smouldered in Texas, the President of the United States issued his proclamation appointing a provisional governor for the State, and providing for the assembling of a convention, with a view to the re-establishment of a republican government, under an amended constitution, and to the restoration of the State to her proper constitutional relations. A convention was accordingly assembled, the constitution amended, elections held, and a State government, acknowledging its obligations to the Union, established.

Whether the action then taken was, in all respects, warranted by the Constitution, it is not now necessary to determine. The power exercised by the President was supposed, doubtless, to be derived from his constitutional functions, as commander-in-chief; and, so long as the war continued, it cannot be denied that he might institute temporary government within insurgent districts, occupied by the National forces, or take measures, in any State, for the restoration of State government faithful to the Union, employing, however, in such efforts, only such means and agents as were authorized by constitutional laws."

Therefore, there can be no doubt that the President has the authority to take necessary action to restore the republican form of government to the states. 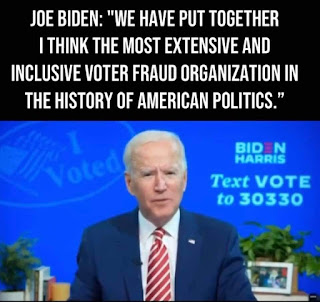 Apart from fraud and various election-interference causes of action, it is my opinion that the following charges could also be levied against those who participated in the color revolution:

Whoever incites, sets on foot, assists, or engages in any rebellion or insurrection against the authority of the United States or the laws thereof, or gives aid or comfort thereto, shall be fined under this title or imprisoned not more than ten years, or both; and shall be incapable of holding any office under the United States.

If it turns out that any politician was involved in seditious conspiracy, then he or she is barred from holding office.

It is my opinion that President Trump should not show the perpetrators any leniency. He should make an example of them, lest some evil-doers feel inclined to steal an election in the future.

Legal Disclaimer: The above does not constitute legal advice, but is solely the opinion of the author.