Excerpt of Beyond the Cherry Tree


In Dr. James P. Hodges' book, Beyond the Cherry Tree: the Leadership Wisdom of George Washington [order], he discusses Washington's ethical and moral principles for effective leadership. This book is part of a system devoted to Washington's mission of  developing desperately needed leaders in this period of national turmoil. Here is an excerpt from Chapter One. 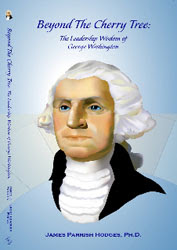 
CHAPTER ONE – LEADERSHIP AT EVERY LEVEL

...President Dwight D. Eisenhower said, “Leadership is getting other people to do work because they want to.”

Harry Truman described the need for leadership when he wrote, “Men make history, and not the other way around. In periods where there is no leadership, society stands still. Progress occurs when courageous, skillful leaders seize the opportunity to change things for the better. “

Effective leadership should exist within the entire company—not just at the top. Everyone should be involved in the leadership process. Old-style leadership of command and control puts a company’s future at risk, because it can’t adapt fast enough to meet global competition.

The new process of “collective leadership” is fast-acting. Only results count—not the time worked nor the energy expended, as compared with the sales process, in which only the sales count.

More and more big corporations are adopting the collective leadership process. They divide themselves into entrepreneurial units with teams set up to start and finish the process. While called a “new style,” it resembles the way things worked before assembly line production. This new style of leadership is a transformation change that many accept readily.

Effective leadership within this new process listens to advice from workers, takes and gives criticism, but does not criticize, is not cynical, creates enthusiasm and not fear, and trusts the workers to behave ethically. Leaders create the corporate culture in which work is done—the better the environment, the greater the productivity.

The new style collective leader seeks 360-degree feedback—that is, comments from every stakeholder around the spectrum. Under the old style of command and control leadership, workers didn’t dare show weakness. It would be held against them, even grounds for dismissal. Under the new style leadership, they are even encouraged to do so. Admitting they need help will best assure that the work will be done—correctly.

Will it be easy for you to become a more effective leader? No! Will your effort be worth it? Yes!

As George Washington’s contemporary, Thomas Paine—the author first of Common Sense and later, American Crisis—wrote, “The harder the conflict, the more glorious the triumph. What we obtain too cheap, we esteem too lightly; it is dearness only that gives everything its value. I love the man that can smile in trouble, that can gather strength from distress and grow brave by reflection. ‘Tis the business of little minds to shrink; but he whose heart is firm, and whose conscience approves his conduct, will pursue his principles unto death.” America is hungry for this type of leadership.

Between a stimulus and a response, there is a moment in which one must make a choice of what action one will take. The more thoroughly ingrained the ethical leadership principles are within us, the more likely we will choose to act correctly.

The effective leader is a skillful communicator. General Washington wrote one of the finest documents ever produced on leadership. It was in response to a request from Colonel William Woodford at the beginning of the Revolutionary War. Woodford had asked his commander’s advice on the proper conduct necessary to be the most effective leader of men. Washington advised him:

“The best general advice I can give is to be strict in your discipline, that is, to require nothing unreasonable of your officers and men, but see that whatever is required be punctually complied with. Reward and punish every man according to his merit, without partiality or prejudice; hear his complaints, if well founded, redress them, if otherwise, discourage them in order to prevent frivolous ones. Discourage vice in every shape, and impress upon the mind of every man from the first to the lowest, of the importance of our cause, and what it is they are contending for. Forever keep in view the necessity of guarding against surprise. Be plain and precise in your orders, and keep copies of them to refer to, that no mistakes may happen. Be easy and condescending in your deportment to your officers, but not too familiar, lest you subject yourself to a want of that respect, which is necessary to support a proper command. These, Sir, I have presumed to give as the great outlines for your conduct. Signed, Geo Washington.”

American companies could earn hundreds of billions of extra dollars each year and improve productivity by implementing Washington’s business leadership practices. Washington’s accomplishments stemmed from his ability to turn complexity into simplicity. His leadership and management skills had different focuses. He believed that one leads people and the other manages processes. Leaders do the right things. Managers do things right. The key to his success lay in his ability to distinguish between the two and to give each its due respect...


You can build an organization based on Washington's principles by educating each member about his principles for successful leadership. This book makes an ideal gift to inspire your employees.

To purchase book, please see Order page. A portion of the proceeds is donated to Freedoms Foundation at Valley Forge, a non-profit 501(c)(3) organization dedicated to teaching patriotic leadership to school children. There is a discount for bulk orders for businesses, universities, school, governments, non-profits, and communities.


James P. Hodges, Ph.D.
Author of Beyond the Cherry Tree: the Leadership Wisdom of George Washington


To schedule a personal presentation by Washington elaborating his principles, please contact Dr. Hodges at jim (at) leadershipbygeorge.com.